The Campfire Scary Stories That Will Terrify You

It’s Halloween...the time of year when ghosts and goblins roam the streets asking for candy and haunted houses scare up hoards of people who dare to enter. It’s also the very best time to light a campfire, huddle around its warmth with hot chocolate and s’mores, and scare the daylights out of your friends. Here at Tentrr, we like to think that we have the best go-to scary stories. Here are our top 5 that are sure to give you goosebumps.

1. Humans Can Lick Too

At 16 years old, Ashley’s parents decided that she was now old enough to be left alone without a sitter while they went out for the evening. Although they were a bit concerned about leaving a young girl in a house all by herself, they knew she was sensible. And besides, she did have the pet Alsatian dog, Bailey to look after her and keep her company.
The parents left for the night, leaving Ashley with emergency phone numbers and plenty of food for the night. Ashley was thrilled to be spending her first night alone and watched TV until 11:00 rolled round.
Deciding she was tired, she moved upstairs to her comfy bedroom to retire for the night, Baily following her all the time.
She had only just fallen to sleep when she awoke to a dripping noise coming from the bathroom. She wasn’t worried, but was curious as to what the noise was. She lowered her hand down beside her bed to gain a little comfort from the Alsatian. She felt the warmth of his soft tongue as he licked her hand, showing her that he was okay and that everything would be alright. Feeling assured, she drifted off to sleep once more.
Waking once again to the sounds of the dripping tap--or whatever it was--in the bathroom, she instinctively dropped her hand down to pet Bailey. Once again her dog offered up the loyal companionship that only a much trusted and loved pet can, and licked her hand. She fell back asleep.
That annoying noise was still going! She reached for her dog, but he wasn't there. The clock read 3:30. Where were her parents? She needed to find Bailey. She walked out into the bathroom.
When she took in the sight, she screamed, barely being able to contemplate the horror. Bailey had been murdered and his blood was creating the dripping noise. Still screaming, she ran back through the house to her parents’ room. She had to call the police. But the phone was dead. She turned around to see her parents were also murdered on the bed behind her. She looked down at a note written in blood, it read:
"Humans Can Lick Too" 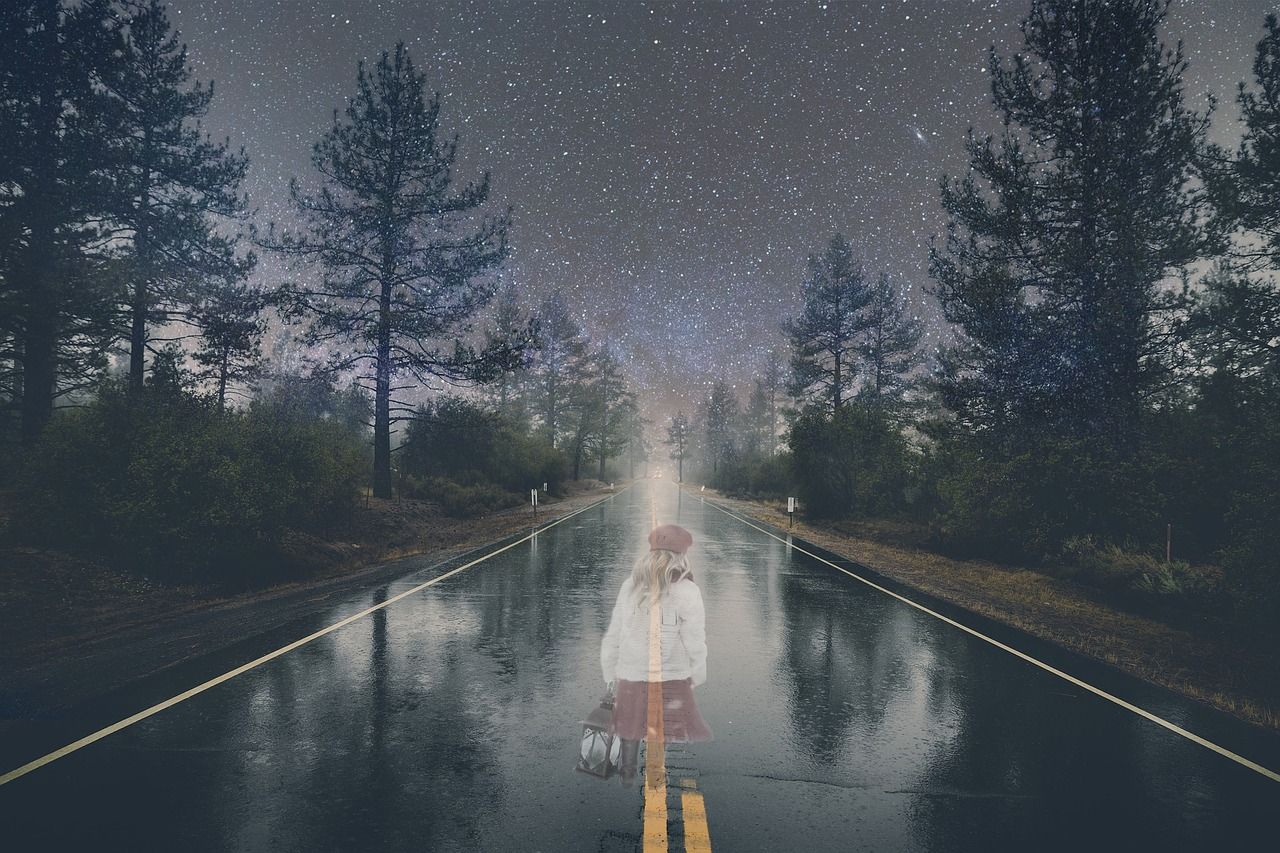 A newlywed couple, Nathan and Heather, were driving up the northern California coast to spend their dream honeymoon in a quaint bed-and-breakfast with a seaside view. They had hoped to arrive before dark, but a heavy fog had descended on Highway 1 and their progress was slow. They were at least an hour and a half from their destination as night fell.
If you've ever driven that stretch of highway you know how torturous it can be, with its narrow lanes and switchback curves. It was just as they were rounding one of those curves that they passed a solitary hitchhiker, a young woman in a wispy white dress standing on the shoulder with thumb outstretched.
"Good luck getting a ride on a night like this," muttered Nathan under his breath.
"Stop the car and turn around," said Heather. "Please, she's all alone. We have to give her a ride."
"But we're two hours late."
"Please."
Nathan pulled off the road and turned around. As they approached the girl from the opposite direction they could see her dress was in tatters. Her face was pale and gaunt.
"Can we give you a ride?" Heather smiled at her as they pulled up beside her.
"Oh, thank you!" The young woman appeared to be in her late teens or early twenties. "I have to get home. My parents will be worried sick."
"Where do you live?" asked Nathan.
"Just down the road, about 10 miles," she said, climbing into the back seat. "There's an intersection with an abandoned gas station. Across from there. It's a white house with a rose garden. They're waiting for me."
As they made their way north again Heather attempted to make conversation, but the girl fell silent and slumped in the back seat, apparently asleep.
After about 15 minutes Nathan spotted a dilapidated service station.
"Is this it?" he asked. "Hey, is this the intersection?"
Heather turned to wake the young woman and her breath caught. "Nathan, she's gone."
'"What do you mean, 'she's gone'?" Nathan said, pulling into the driveway of the white house. "How can she be gone?"
She was right. The hitchhiker had vanished.
A light came on and two people, an elderly couple, stepped out onto the porch.
"Can we help you?" The man looked as though he dreaded hearing the answer.
"I don't know," Nathan began. "We were driving, and we picked up this hitchhiker, a girl."
"And she gave you this address and asked you to bring her home," the man finished.
'Yes," said Heather. “How did you-”
"And then she was gone?"
Heather nodded.
"You aren't crazy. And you're not the first. She was our daughter. Her name was Diane. She passed away seven years ago, killed by a hit-and-run driver on the highway. They never caught whoever did it. But I guess her spirit won't rest until they do." 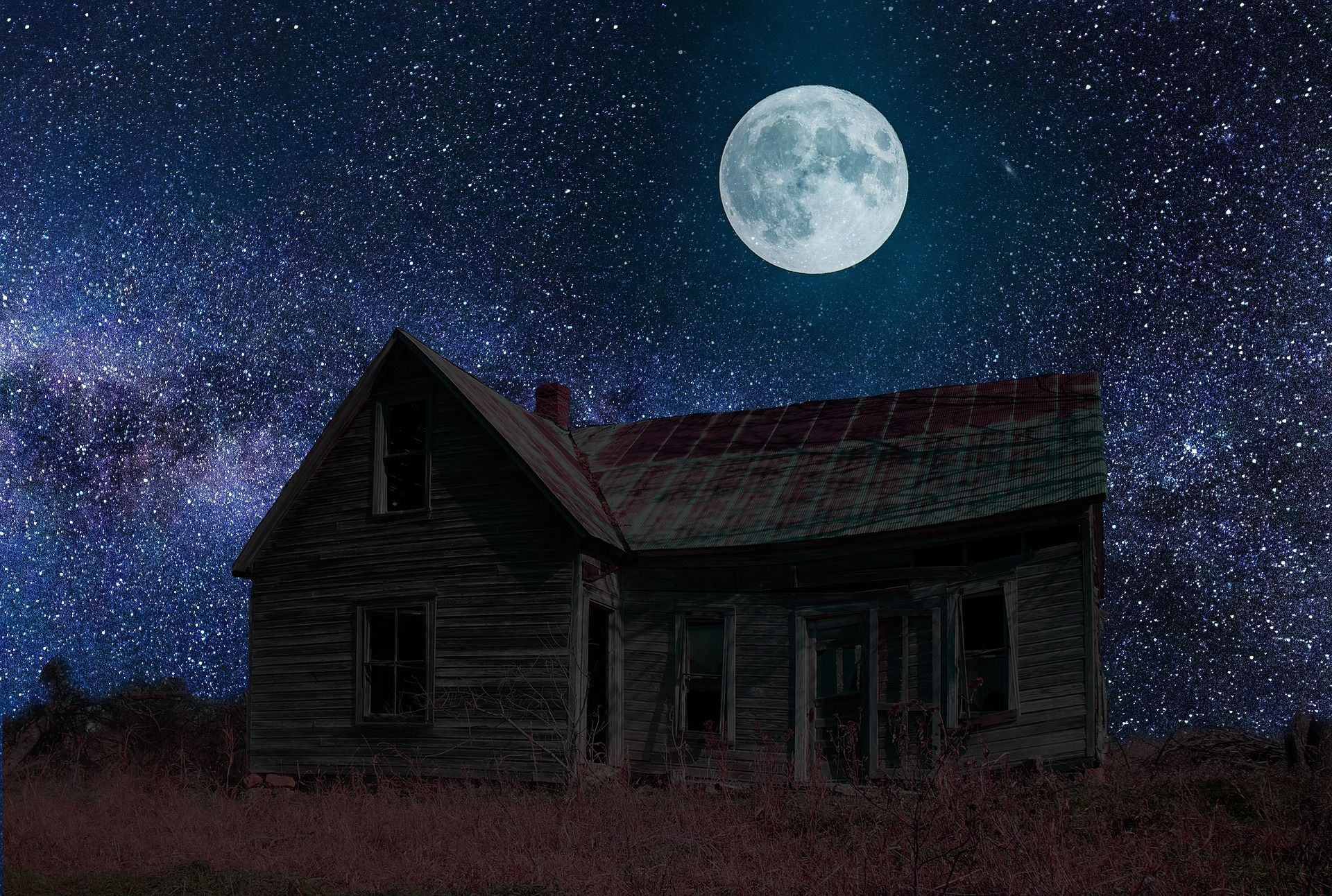 One night a man was walking alone in the woods. He noticed that it was getting dark outside and he needed to find a place to sleep. Eventually, he came across a cabin and decided it would suffice. When he went in, he noticed that the walls were covered with paintings of people and their eyes seemed to be following him. It freaked him out a little, but since it was late he decided to ignore it and go to sleep. When he woke up in the morning, he noticed that there were no paintings only windows. 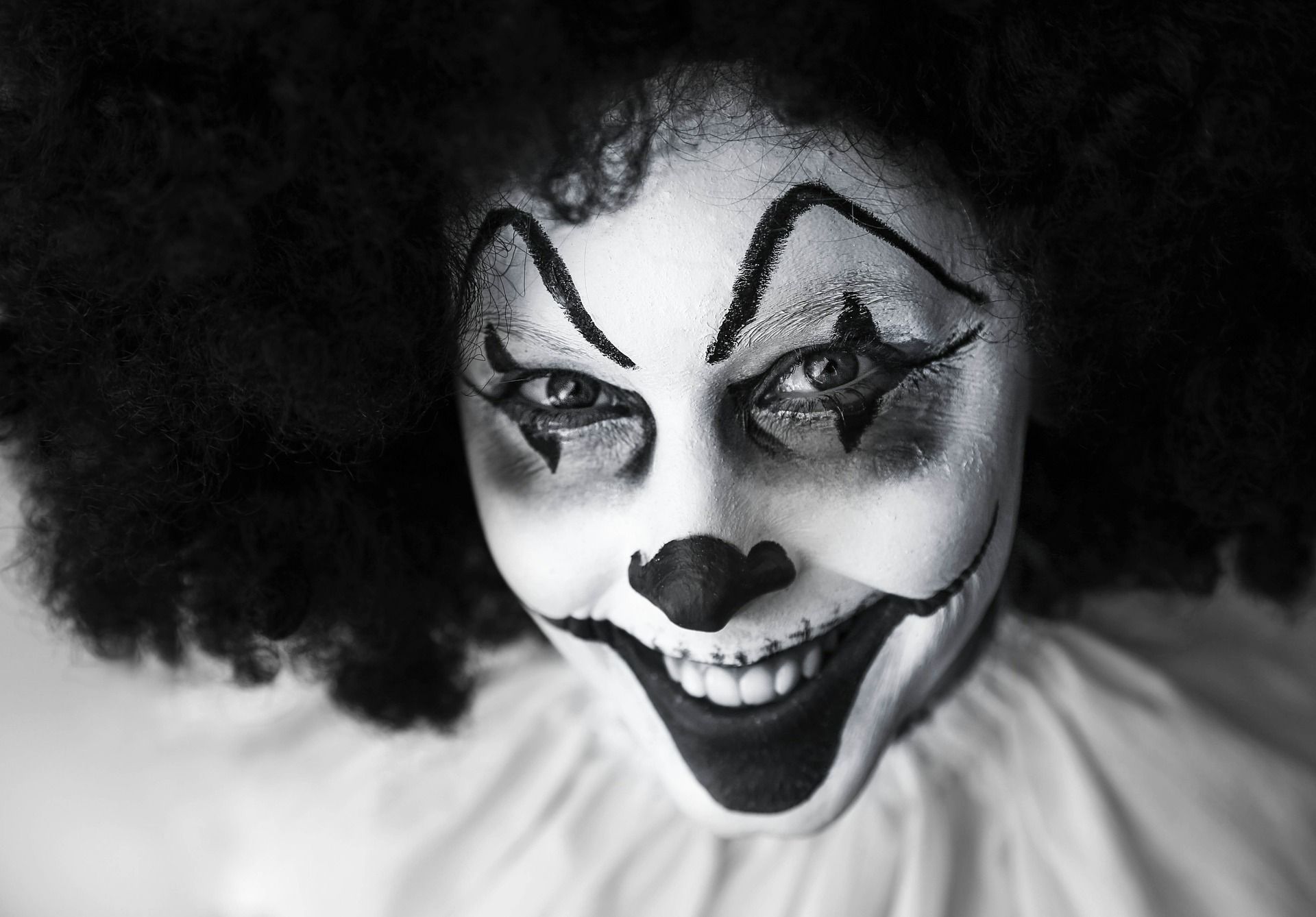 Christy, a teenager, was babysitting for a family in Newport Beach, CA. The family was wealthy and had a huge house — you know the sort, with a ridiculous amount of rooms. The parents were going out for a late dinner/movie. The father tells Christy that once the children are in bed, she should go into the den, because he didn’t want her wandering around the house, and she can watch TV there.
The parents take off, and soon after, she gets the kids into their beds and goes to the den to watch TV. She tries watching a movie, but she is disturbed by a clown statue in the corner of the room. She tries to ignore it for as long as possible, but it starts freaking her out so much that she can't stand it.
She decides to call the father and dials his number, and he answers. "Hey, the kids are in bed, but is it okay if I switch rooms? This clown statue is really creeping me out."
The father’s voice drops. "Get the kids, go next door and call 911."
“But why? What's going on?"
"Just go next door and once you call the police, call me back."
She hangs up the phone, gets the kids, goes to the neighbor’s house next door, and calls the police. When the police are on the way, she calls the father back. "So, really, what's going on?"
He responds, "We don't have a clown statue."

What campfire classic scary story is most likely to happen to you?